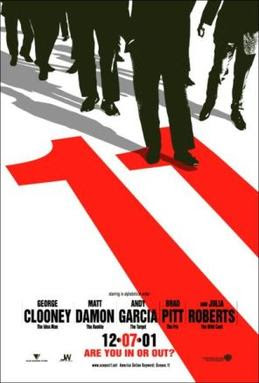 This movie has been out for 18 years, but if you’re like me before a couple months ago and haven’t seen Ocean’s Eleven, you should be warned there will be spoilers below.
Ocean’s Eleven is a fun puzzle of a heist movie for every second of the film. There is not a minute out of place, if you miss one moment you can be lost. The characters work extraordinarily well together, and they really draw you in more to the story. The story is ingenious, and several key twists are embedded so well, it’s hard to catch them. Most of the movie is spent building up a heist to steal money from Terry Benedict (Andy Garcia), by Danny Ocean (George Clooney), and his crew: Rusty Ryan (Brad Pitt), Frank Catton (Bernie Mac), Reuben Tishkoff (Elliott Gould), Virgil and Turk Malloy (Casey Affleck/Scott Caan), Livingston Dell (Eddie Jemison), Basher Tarr
(Don Cheadle), Yen (Shaobo Qin), Saul Bloom (Carl Reiner), and Linus Caldwell (Matt Damon). Despite the possessiveness in the title, the crew as a whole numbers 11 – including Ocean.
The plot of Ocean’s Eleven is laid out fairly simply, but the complexity of the plot, movie wise and heist wise, grows as the film progresses. The intricacies of the heist and the reasons for it slowly get revealed, with hints along the way as to the way stuff plays out. It’s so fascinating, and refreshing, especially if you’re in to puzzles. I enjoyed the retort from Tess (Julia Roberts) to Terry, where she turns his camera words back on him at the end of the movie. There’s not really much else she’s used for here, she’s still important to the story, mostly as motivation for the heist. That is a bit of a bummer, because obviously Roberts is a talented actress.

The character development in Ocean’s Eleven is really interesting. We’re introduced to most of the characters via a recruitment process, which makes the start of the movie unique as compared to others. We’re given the information we need to know about them and really we were given just enough. It’s quite perfect, and works for most of the cast. The only thing I felt like I was missing for with characters was a bit more on Danny himself, as well as a little bit of background between Rusty and Danny’s relationship.

The cinematography and costume work all seem pretty standard for the early 2000s. There’s not much need for CGI here, so everything has aged quite gracefully in Ocean’s Eleven. This film is one everyone should check out and I hope people do. I was hooked from the moment the movie started to the very end.