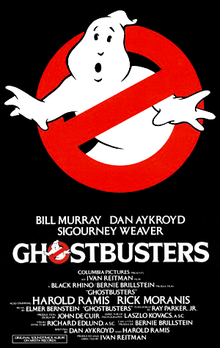 I actually didn’t find Ghostbusters all that intriguing. It’s why I never picked it up in the first place. It seems too far ahead of its time first of all, technology wise. Murray and Aykroyd clearly have chemistry, along with Weaver, but the rest of the cast seems extraordinarily out of place at first glance. I do not appreciate the secretary at all, whatsoever. It seems as if her role was to be the joke of the group, a play on the woman’s role in the 1980s, but I’m just not buying it. She hates her job. Clearly the only reason she sticks around is for Egon. Peter Venkman is strangely the sanest, yet also the weirdest and creepiest character of the bunch. Stantz is my favorite buster of ghosts, no doubt.

Hudson is meant to be the serious character. I get it, but he just feels out of place compared to the rest of the crew when you get done with the movie. I did do some research, and apparently his character was originally meant to symbolize the audience. This was rewritten, but really, I don’t think it was. His character represents the audience, and that’s what makes the most sense. Though I still have a hard time believing in ghosts.

This movie isn’t particularly scary, though I did jump when the demon dog jumped out of the room. The ghost/demon design is decent, I mean it was the 80’s. I feel like I’ve seen the plot before, girl gets possessed, becomes the villain and gets rescued. However, this movie came first, but I just have a hard time putting down the fact that I’ve seen elements of this movie in other films. The funnest part of the movie is the third act, after the ghostbusters are released from prison. The four ghost hunters finally show some cohesion, definitely signifying the growth as they get Gozer as the Stay Puft Marshmallow Man. I laughed when all of the goo went everywhere.

Overall, I get its a cultural phenomenon. I just don’t see it myself. The ghostbusters are fairly annoying, and it is clearly a product of its time. The plot wanders around aimlessly, trying to figure out where it wants to go, and it drags with certain jumps in the middle. Like one of those runs on the treadmill where you walk for long periods and then sprint for 10-20 seconds. Don’t get me wrong, it’s a decent movie! But coming at it 35 years later? This is not a standout movie. Groundhog Day is far more unique init of itself…