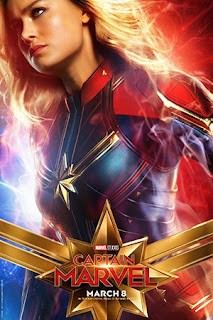 Captain Marvel is a fun but flawed flick. The first half of the movie is slow, and uncoordinated, with the filmography struggling immensely to handle the beginning action. The second half of the movie amps it up, with Ben Mendelsohn stealing the spotlight as Talos. The film very much takes on a buddy cop kind of feel, with Carol Danvers(Brie Larson) and Nick Fury(Samuel L. Jackson). Brie and Samuel work extraordinarily well together, and you can really feel their chemistry.

The plot definitely struggles, but I like the idea behind it. It feels like a Phase 1 movie, in where it tries to bring an unfamiliar character to the screen, and make them familiar, but that’s where it fails. Many people knew nothing about Captain Marvel, who or what she is. They should have capitalized that and made the film more unique in the manner. The twist is predictable, but a good motivator for knowing all the facts before making a decision. Captain Marvel is a powerful woman, and this movie fails to carry that powerfulness. The movie is impactful, and I heard multiple people around me, little girls included talking about how the Captain is their new favorite hero. It is a good movie, but it should have been better.

The action scenes work well in the context of the film. Thanos is screwed. The flight scenes, and the Kree scenes are some of my favorite. Jude Law, Gemma Chan, and Lashana Lynch were great additions to the cast and really help the movie shine. Jude and Gemma help provide some levity and development to the story and add to the action of the movie. Lashana has great chemistry with Brie, and helps the emotional aspect of the story, reuniting Carol with her past self.

Brie’s take on the character kind of shocks me. I can understand the necessity for some stiff acting in the beginning, and Brie shines during those moments. But as Carol begins to remember her background, you should be able to bond to the character more and relate to them on an emotional level and that’s a failure here. Emotional moments don’t have as much of an impact, and I wish they did. Brie is a great soldier though, and I hope in Avengers: Endgame and potential sequels they choose to hold her in that realm. Brie is a great actress but she feels out of her realm in some scenes.

The score works, and the 90’s Easter eggs are fun. Some, I could have done without, as they just seemed a moment to reinforce that the movie was set in the 90s. Goose, despite all of my cat reservations is probably my second favorite character in the movie, second to Talos. Goose has many moments where he is just the defining character and is all about the spotlight.

Overall, I enjoyed the movie. It’s fun, it’s reminiscent of Captain America: The First Avenger in a sense. It feels like a middle of the pack Marvel movie, and it should have been so much more. The cast is phenomenal, and the de-aging technology used for Samuel and Clark Gregg(Phil Coulson) is great. There could be some plot hole or retcon issues for the movie, but that’s reaching into spoiler territory.

You can find Captain Marvel in theaters now!

Let us know what you think! Cancel reply