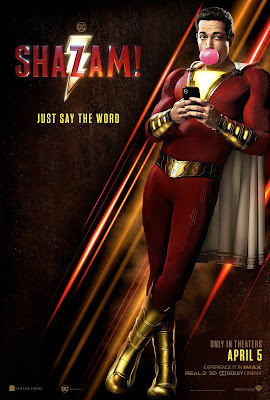 Shazam! is an emotional journey that’s full of laughs and a lot of heart. It’s well directed, the cast is phenomenal, and Billy Batson/Shazam will definitely be sticking around in the DC Expanded Universe. The marketing for this movie is done phenomenally well, and major props to the marketing department for their choice in footage and sequences to keep the best surprises hidden. Most of the movie is spent developing Billy as a character, and the last third is your giant action scenes like typically superhero movies. The film focuses on Billy discovering who he is and who his family is. You can always find your way back home to family and that’s what this movie really tries to drive home.
The plot staggers in certain points. I’m a huge fan of Mark Strong, but he felt underutilized here. We struggle to really connect to why he is the villain here. A couple more minutes on him and his backstory, and we really could have connected to him and understood him more. But the time spent on Billy was well worth it. We see his idea of family go from one thing, to another, as he learns that not every definition is black and white.
Most of the action happens towards the end of the film, but Shazam learning how to use his powers is one of the best parts of the film. It’s really pushed, and they manipulate it well for the day and age. It’s how Freddy and Billy bond and learn more about each other. You can see Freddy slowly wear on Billy and it affects him, but eventually he figures out it was for the best. After he does figure it out, you can see him still struggle with the concept of family, which makes the character arc Billy takes all the more real. Not everyone turns on a dime when they learn something, most times it still takes them awhile to get used to the new concept. 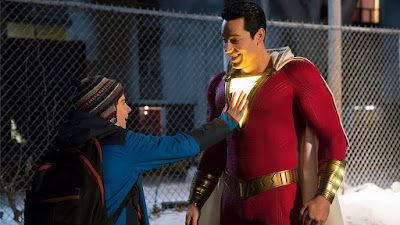 The cast is absolutely phenomenal. Levi and Angel kill it together as Billy/Shazam, and Darla is probably my favorite from the film. The chemistry is great all around, so I’m looking forward to the future sequels we will get from this cast. Billy’s foster family is great, really understanding. I like the foster parents as well. Can’t say more than that otherwise I fear spoiler talk.
This film is just filled with joy and wonder from the kid cast and Levi. When Shazam first appears, Freddy and Billy are just having fun learning about Billy’s new powers. Its full of laughs and “whoops how did I do that?” moments. It’s not as strong plot wise as Wonder Woman, or Man of Steel, it falls in a more traditional origin movie plot line but it still plays on its strengths of being an unknown hero.
Overall I really enjoyed this movie. It doesn’t prove DC “can” be joyous, there’s plenty of joyous moments in the DCEU. This movie focuses on a kid becoming a superhero, something I know we’ve all wished for at some point in our lives. The wonder, the amazement that comes with those powers, is the focus, and the theme pulls in there’s a place for everyone, you just have to find it.