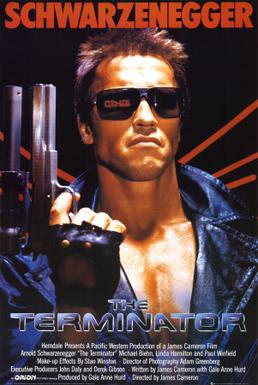 The Terminator is a science fiction action film from 1984 that has aged incredibly well. The CGI is a product of its time, but represents rather well for 80s technological advances. The plot is well done, manipulating the damsel in distress typical story to its advantage. It’s definitely a highlight of science fiction movies, with time travel and robots involved. Especially for being a movie from the 80s. The characters are all rather well done, and I can see why Linda Hamilton is being brought back for Terminator: Dark Fate. She’s special in this movie, and I’m glad to see the focus for the future is on her.
The film’s special effects seem very well put together. There’s a few slight instances where the age of the film shows, like when Schwarzenegger’s robot body climes out of the flames, and chases Sarah Connor (Hamilton), and Kyle Reese (Michael Biehn). Other than those moments, it’s some really brilliant work by the team. Costumes and sets all for very well, seems like an 80s movie definitely.
I absolutely love the plot of the film. The manipulation of the damsel in distress plot works really well, and it suits the film. Sarah Connor starts out as the damsel in distress, but works her way up towards the hero of the film, turning Reese into the soldier he’s always been after he gives up. She’s lost in the beginning of the movie, wondering who she’s meant to be after getting stood up, and she comes into her own with this story line. It’s perfect. Hamilton makes a great star, and I wanna say this is her at her A-game, but don’t quote me on that. I haven’t seen her in anything else.
Biehn made me a little angry though. It is hard convincing that someone can fall in love based off of a picture, but maybe that’s my cynical side. Anyways, Reese feels underdeveloped. Seeing more of his future, maybe how he grew up, instead of just him as a soldier would have helped me feel more connected to him.
The science fiction and action elements are superb. Robots, explosions, apocalyptic future, and time travel. What more could a girl ask for? The action sequences are great, really fun to watch. The idea of a “phonebook” killer? (thank you Scott) Super crazy, but I liked it. The robot controlled future is a neat idea, and I believe this movie was the first in the dystopian phenomena, making it even more unique. It’s scary to think how accurate that future could be, especially with the AI usage increasing everyday.
What a great film. Definitely rememberable, and a cult classic (Ghostbusters, not so much). I can see why this film spawned so many sequels, even if the timeline of those sequels are a bit mixed.