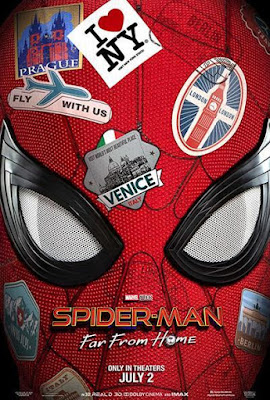 Spider-Man Far From Home is a wonderful conclusion to the MCU’s Infinity Saga, and an even better opening for what’s to come from the MCU. This film reminds me a lot of Iron Man 3, where we’re dealing with our superhero experiencing trauma from a prior experience, in this case an Avengers movie. Peter Parker (Tom Holland) experiences a ton of growth, moving from the “small town” boy he’s been, to someone who realizes he has a bigger influence than he thought. Holland does a great job, but the real star of this movie? Jake Gyllenhaal. The rest of the cast backfills quite nicely, and I love Jon Favreau’s return to a more prominent character. It’s great to see how far Happy and Peter’s relationship has come.
Gyllenhaal plays a phenomenal Mysterio. His character as a whole is so charismatic, I loved him more and more as the movie progressed. Quentin Beck is so charismatic, such a leader, even I was following what he was saying. Even though I disagreed with what he was saying profusely. More on that below. Mysterio now sits atop one of my favorite character lists in the MCU, and it makes me very happy Marvel picked him up, instead of Warner Bros. for Batman. His charisma in this role is what makes every moment glorious and it would have been lost as Bruce Wayne.
I am in love with Zendaya as MJ. She’s not the traditional take by any means, but she’s really killing it as Peter’s love. Holland took a big step up on my Spider-Man favorites list, as Tony was truly his Uncle Benn, and it is felt in this movie. Personally, I still wish we’d see Uncle Ben, but I can’t fault the MCU for going this direction. Tony’s death in Avengers: Endgame was obviously widely felt, but the impact he had on Peter makes the death even more widely important.
The emotions will take you on a roller coaster in this movie. Young love, old love, remembering our Avengers. I didn’t cry, but I really could have. Watching Peter as well as Happy break down over losing Tony, really takes a toll on you. Peter’s growth over this movie is extraordinarily well done, he becomes a different Spider-Man than I’ve seen in any of the animated or live action television shows or movies. He becomes bigger than the neighborhood, and realizes he has to step up to the plate. Please note my wording, he doesn’t step into Tony’s shoes. He takes his own path towards the idealistic worldwide superhero. Well done on the story y’all, well done. This movie also has some of my new favorite quotes.
I am missing some of the scenes we saw in the trailer. I think it would have benefitted the story more, showing Peter tackling neighborhood problems at the beginning of the movie. There would have been more connection to his growth in the movie. There’s plenty of action, yes. But those scenes really would have shown the progression from neighborhood Spider-Man, to the Spider-Man at the end of the movie.

There are a few spoilers I would like to talk about, but this movie is just coming out, so be warned, and if you’re interested, check it out below! 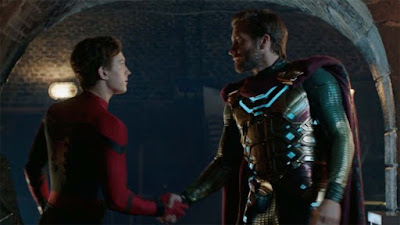 Mysterio tops the list of my favorite MCU villains. He’s charismatic, crazy, maniacal, and lovable all at the same time.  I would have followed him like the rest of his crew did. The fact that he developed the illusionistic projectors used in Captain America: Civil War was an inspiring take, to make Tony Stark the villain to many people. I saw the twist from Mysterio fooling people, to the villain, but to incorporate people who hated Tony Stark as a person? It was almost as if this Spider-Man Far From Home is Tony Stark’s last bit of his journey, filling in pieces of his journey as a CEO, and hero. It was a perfect incorporation of Stark, strengthening his character all the more.
So those post credit scenes. First of all, J.K. Simmons is my favorite part of the Raimi trilogy, and to see him return was everything! Please, Sony please bring him back. For that moment I stood up and clapped. For Mysterio’s contingency of coming off still as a hero, naming Spider-Man, as his killer, and revealing his identity? Well I saw that coming. Naming him as a killer, not revealing he is Peter Parker. That I was left stunned so well done Sony. Another emotional twist the crew did well, making Peter like Tony, but following his “own” path. The fact that Skrulls are still involved, well that just follows the many rumors about Infinity War and Endgame had originally. Blynn and Mendelsohn reprise their roles from Captain Marvel as they play Maria Hill and Nick Fury, so the opening of doors for the cosmic universe is needless to say, a big one.
Spider-Man Far From Home is in theaters now!